You are here: Home / appliances / Best Options For a Clock Radio With Headphone Jack

You’d think that all clock radios would have a headphone jack option, but that’s not the case. I discovered this when I began shopping for one.

I guess some manufacturers see them as a thing of the past, but it really isn’t. They can be quite practical in certain situations, and can be used with more modern technology as well.

I actually use a headphone jack all the time because I stay up longer than my wife and I don’t want to disturb her sleep. Have you ever dealt with a sleep deprived woman? Yeah, me neither, I know better. Kidding!

I just love her too much to keep her awake. Using headphones is definitely the way to go for me when I want to listen to music late at night.

Using a clock radio with headphones is better than using my ipod ecause it’s so convenient and I don’t have to worry about damaging my ipod if I drift off to sleep. An extra long cord on my headphones insures I don’t yank the clock off of the bedside table if I fall asleep.

If you want to listen to the radio, mp3 music or a cd without blasting it then these selections are the best thing for you. Below you’ll find old fashioned clock radios and more modern radios that work well with ipods and mp3 players.

For those who want to relax, there are also clock radios that play nature sounds, and I personally like the option of listening to nature sounds when I try to relax before bed.

If you’re in a rush…

==>> See only the best-rated clock radios on Amazon here

Can You Resonate With One of These Reasons?

There are several reasons why a person would want or need one of these in their home or office. There no right or wrong reason but see if you resonate with one of these.

Going old school on you!

I like certain AM FM clock radio with headphone jack options because they are really cool looking. Do I strictly get things based on looks? No, but it helps. I can have a radio that looks like a plastic box or I can get one that at least looks sort of futuristic or unique in some other way.

The cool silver color and sleek designs of some clocks make them a top choice. The Sangean clock’s are really slick looking and very stylish.

The Tivoli one looks classy and old school, which is what I’d like to have on my nightstand. It would work well with our bedroom decor, and that would make my wife happy.

There are even options for external mp3 hookups and remote controls! 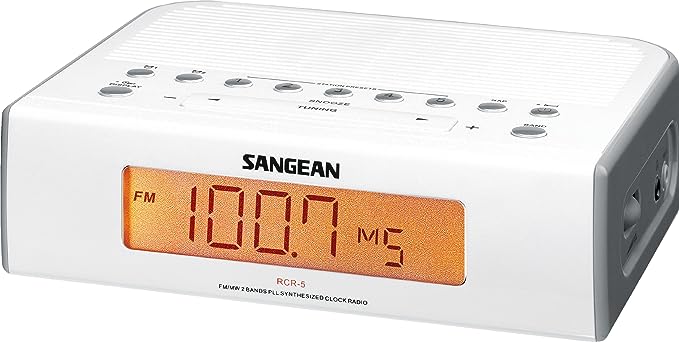 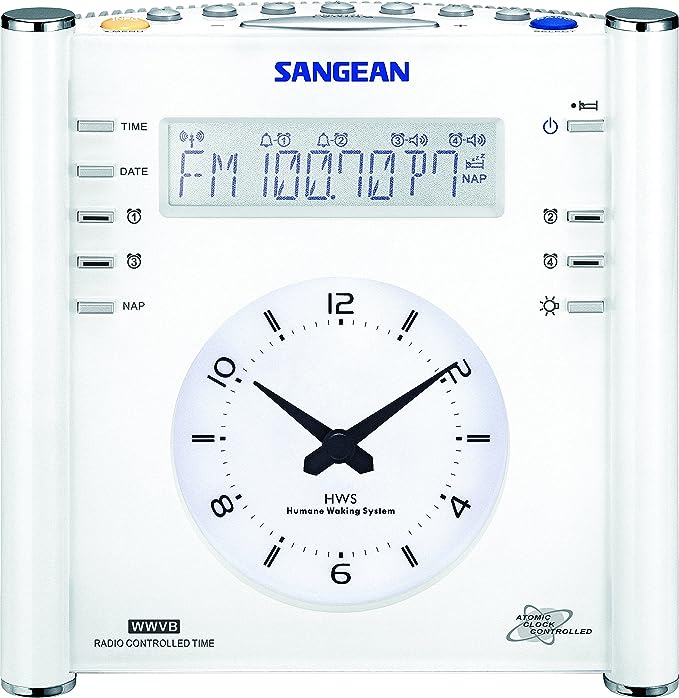 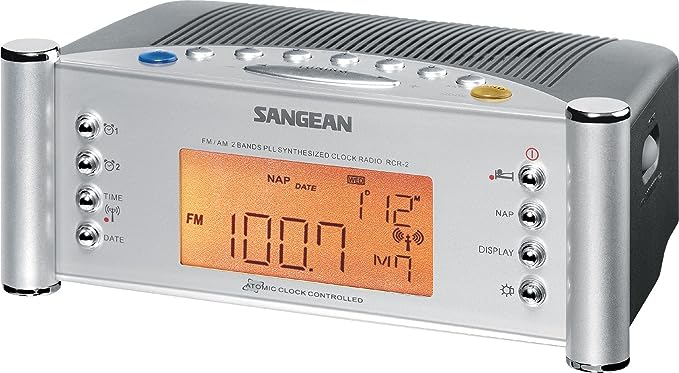 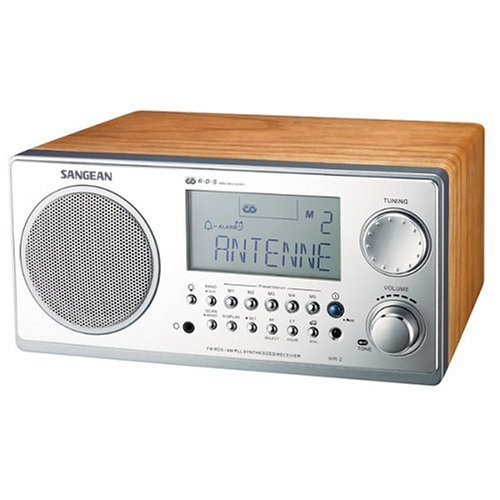 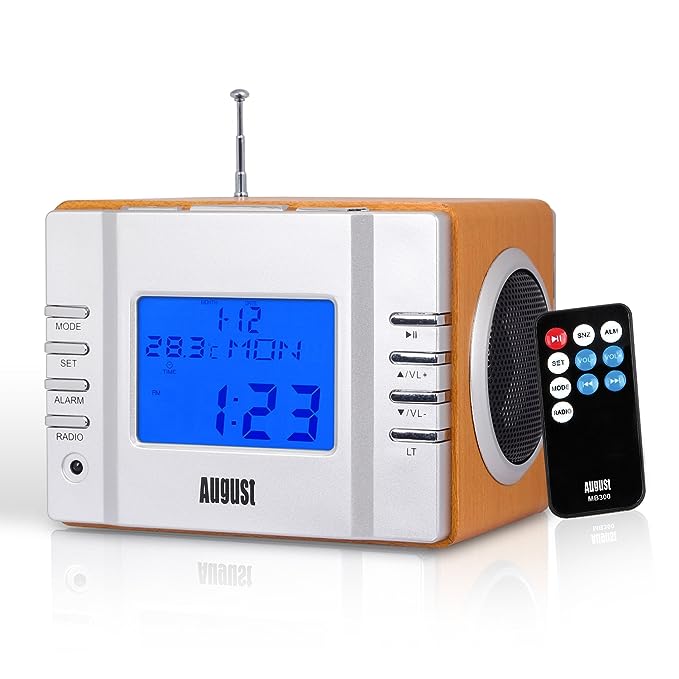 Yes, there are still those of us with a vast CD collection.

One of the better options to have is a CD clock radio with headphone jack, especially if you have a CD collection. I know that MP3’s are the future but many of us still listen to good old CD’s. Am I right?

I know, I’m sounding like my parents when they talked about eight track tapes! I sure never thought this day would come.

CDs are easy though. You just put the CD in, switch it to the right mode, and you can listen to your music right away. If you’re using it to go to sleep, you can put it on replay so you have music all night.

This is great for people who sleep lightly because the music will drown out other more disruptive sounds.

I’m a fan of the Wave Music System and they look really nice too. They’re a perfect combination of new and old technology since you can listen to the radio, CDs, and your ipod or music on your smart phone. It’s amazing how versatile these radios are. 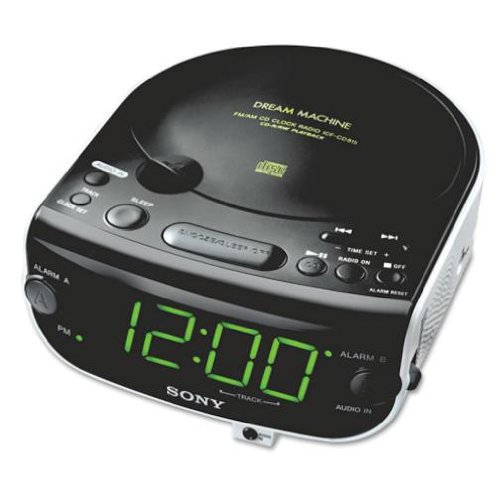 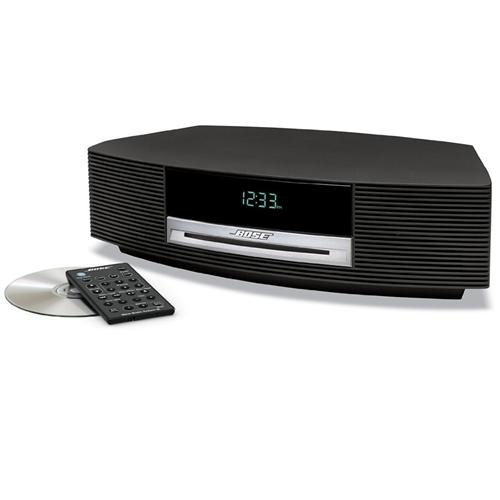 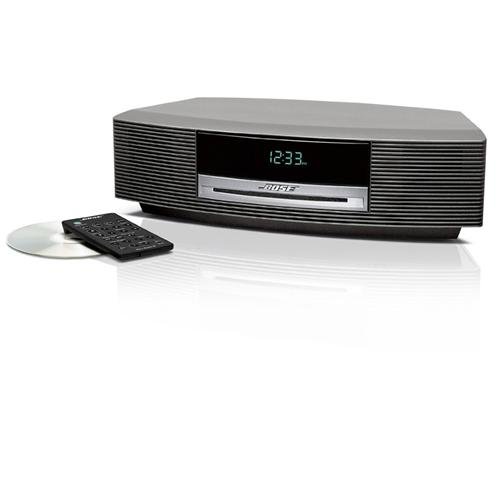 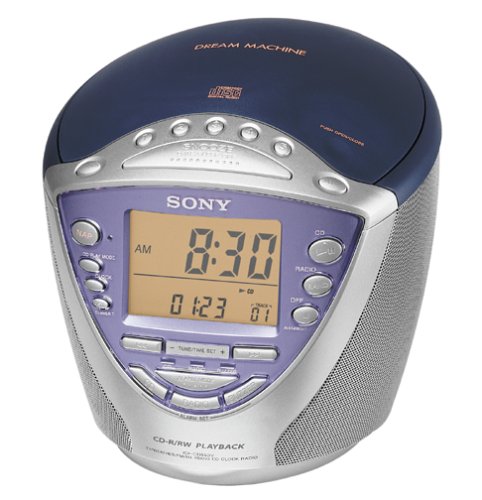 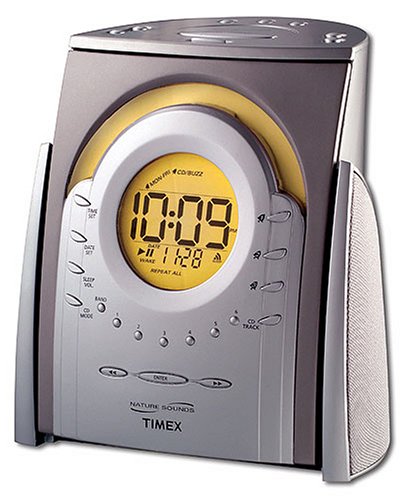 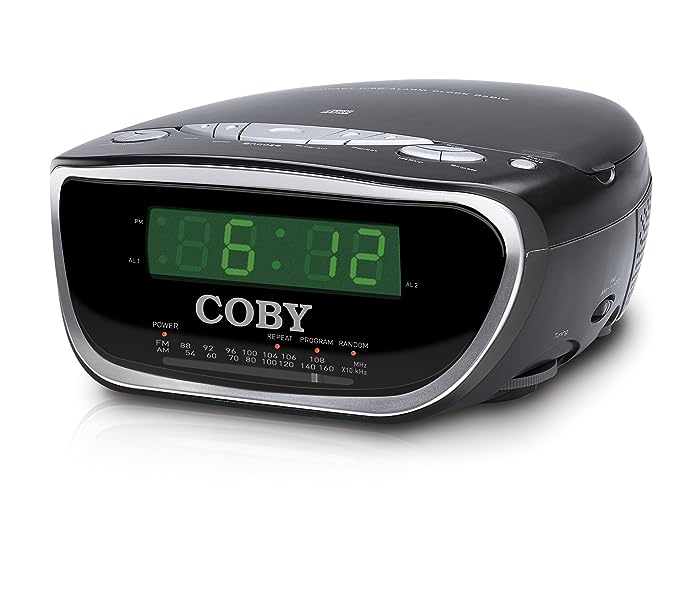 Bose radios are known for their quality.

Listening to this video may help you evaluate them for yourself, but I don’t think the sound quality of the video camera does the radio justice.

There are plenty of iPod clock radio with headphone jack options but I’ve done some research on my own to help narrow them down and feature only the best to choose from.

With all of these you just place the iPod in the slot on the top of the unit and that’s about it! You can instantly listen to all your playlists with the headphones. Preferred music? Check. Alarm clock? Check. Happy partner? Check. Everyone’s happy with this option.

With these radio clocks, you get the best of both worlds. I like having control over what I’m listening to, but I don’t want to ruin my ipod. Leaving my music choices up to some random DJ isn’t my idea of fun. What happens if they play something like Mmm Bop or Don’t Worry Be Happy? I’d have those songs stuck in my head for who knows how long.

I like the Sangean’s the best because it will play internet radio because it has wifi capabilities. What do you think?

You don’t have to only have one of these on your nightstand, you can place these in your office or even the kitchen. Wherever you want! 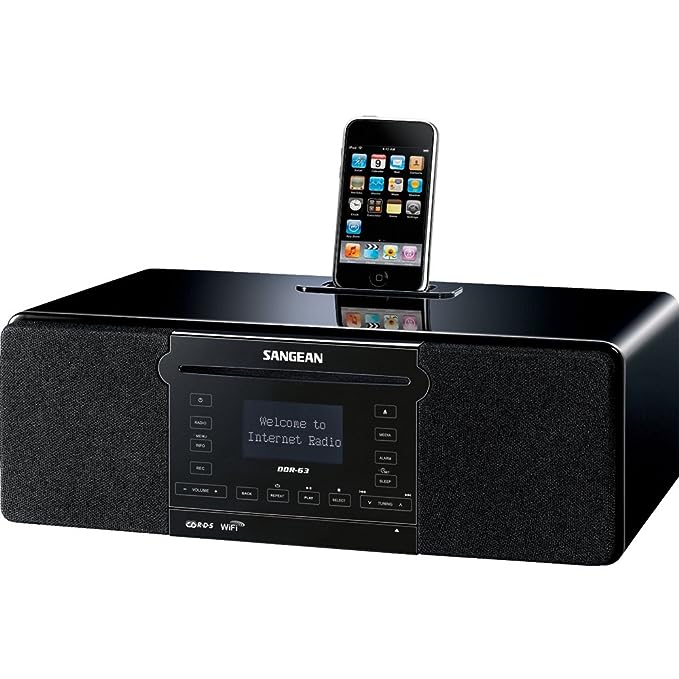 It really a hard task to present you with the best clock radio with headphone jack from my personal experience. I love to read and browsing through reviews is super fun. You get to hear everyone’s opinion and that always helps.

This whole page has a ton of really great options.

I chose this one because it’s really unique, looks really nice and is a real atomic clock. 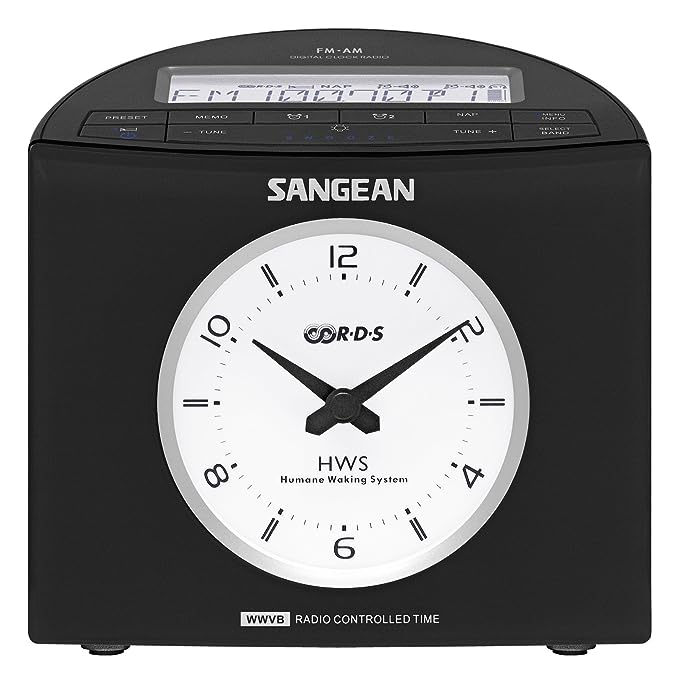 Finding an iPhone clock radio with headphone jack might be a difficult task, although it shouldn’t be. Isn’t that weird since it seems like a large portion of the population owns an iPhone? I would think that manufacturers would be more in touch with consumer needs. There are a few options of iphone radios I think you may like.

The Audiovox is a great economic option and the second Hip Street one is really great because you can even hook up your iPad to it. Since many households have both ipads and ipods, so this could be the option with the most value if you have both.

I think my wife would would choose the Hip Street one and probably place it on her tall chest of drawers. 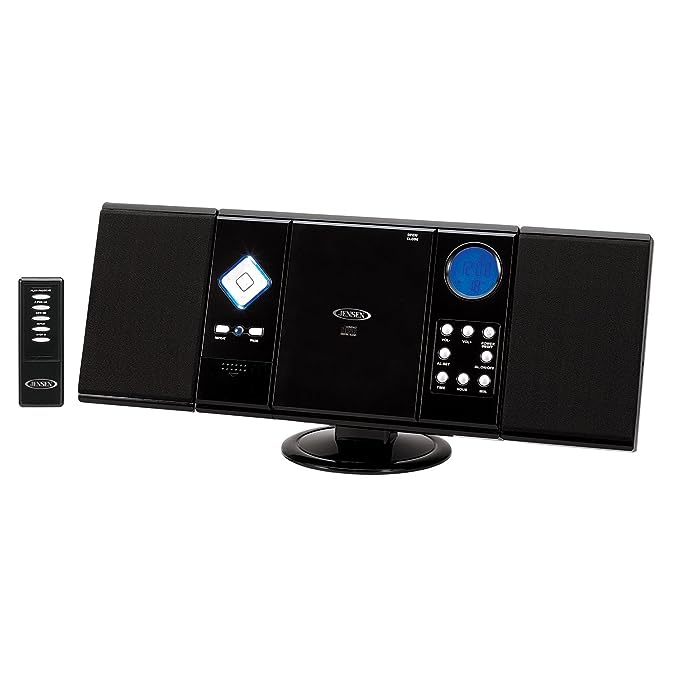 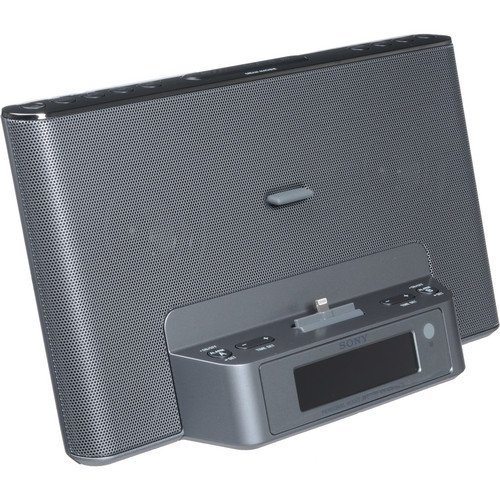 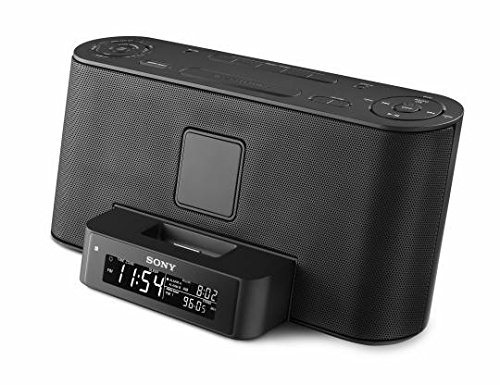 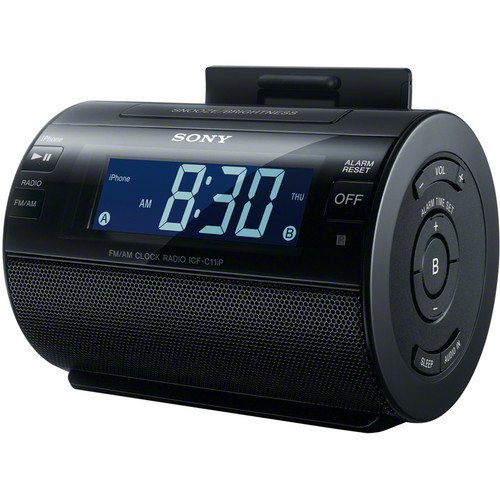 These Are The Headphones You Need For Your Digital Clock Radio?

Dr. Dre sure knows his stuff.

With decades in the music industry under his belt, Dr. Dre knows his stuff when it comes to recording equipment. He’s not only a great artist who puts his soul into his music, he’s also a great headphone designer.